On December 31, 2019, China reported several cases of pneumonia in Wuhan, a city in Hubei Province. Even though the suspected etiology was a virus, early laboratory tests were unable to match it with other known respiratory agents. It wasn’t until January 7, 2020, that China’s health agency announced the cause as a previously unidentified coronavirus. The first confirmed fatality was recorded soon after in a 61-year-old male Wuhan resident on January 9. Initially named 2019 Novel Coronavirus (2019-nCoV), the designation for this virus is becoming more familiar as case numbers continue to climb in other countries. A summary of the January 24, 2020, World Health Organization’s (WHO) statements regarding the current status (Table 1) and distribution (Figure 1) of this emerging infectious disease illustrate this public health challenge. Unfortunately, as current early trends continue, confirmed disease numbers, fatalities, and countries involved will undoubtedly and tragically increase. Also, according to recent information from WHO, this rapid increase in cases between January 23 and January 24 is noteworthy. It bears out early epidemiological evidence that this virus can be transmitted from human to human.

The name coronavirus should sound familiar, as this emerging infection is the latest in a series of widespread outbreaks associated with this group of viruses. Both Severe Acute Respiratory Syndrome (SARS) and Middle East Respiratory Syndrome (MERS), which have resulted in thousands of disease cases and over a thousand deaths, were caused by pathogenic variant strains of coronavirus (Table 2). Coronaviruses include a large group of RNA viruses that can infect many mammals and birds. They are common respiratory viral pathogens in humans and certain domestic animals, with the most frequent symptomatology mimicking that of the common cold. In fact, research into upper respiratory illnesses suggests that as many as 15% of the colds occurring in adults are caused by coronaviruses. They can be spread from an infected person to another by coughing and sneezing, close person contact (ie, shaking hands), or touching an object or surface with virus on it, then touching mouth, nose, or eyes before washing hands.

These two global pandemics were the result of a dangerous characteristic of coronaviruses: They are zoonotic, meaning they are transmitted between animals and people. For example, ground zero for the 2019-nCoV outbreak was a wet seafood market in Wuhan, reinforcing this concern. Wet markets in areas of China are where a variety of processed meats and live animals, including chickens, sheep, pigs, snakes, and cat-like animals called civets, are illegally sold. The risk of microbial cross-contamination between animals and humans is increased, as vendors often kill and prepare animals for their customers to ensure freshness. Like SARS and MERS, the current 2019-nCoV outbreak is thought to be caused by a coronavirus that previously inhabited only animals. An important question to be answered is how did this new coronavirus jump from animals to humans? Using the SARS experience and properties of coronaviruses as starting points, this process probably begins when animals are brought together and placed in cramped, unsanitary conditions. The Wuhan market was an ideal fit for this requirement. These settings often create opportunities for multiple types of viruses to pass between animals, with resultant genetic mutations. Occasionally the “new” genetic variants are subsequently able to be transmitted to and infect people.

Even though the world is still in the earliest stages of this emergency, infection control precautions and procedures for protecting healthcare professionals and the public from 2019-nCoV infection are in place. Hospitals have placed confirmed and suspected patients in strict isolation to limit healthcare worker exposure. As for outpatient facilities, such as dental practices, the CDC and other health organizations continue to recommend the use of standard precautions during provision of patient care: use of personal protective equipment (ie, gloves, masks, eyewear, clinic attire), appropriate cleaning and sterilization of items that are reprocessed, and effective cleaning and disinfection of environmental surfaces. Rigorous compliance to hand hygiene protocols (washing with soaps/antimicrobial soaps or waterless hand hygiene products) is imperative. Fortunately, the precautions that health professionals are already very familiar with also appear to protect them against a variety of potential pathogens, including 2019-nCoV, that are only beginning to be understood.

Table 1. 2019-nCoV Updated Information from WHO

1. 846 confirmed cases for 2019-nCoV globally; of these, 830 cases have been reported from China.
2. Of the 830 cases in China, 375 were confirmed from Hubei Province.
3. 11 confirmed cases reported outside of China in 6 countries: Japan, Republic of Korea, Viet Nam, Republic of Singapore, Thailand, United States; (Note: On January 24, a second case was reported in Chicago, bringing the number outside of China to 12.) Of these 12 cases, 11 had traveled to Wuhan.
4. 25 deaths have been reported as of January 24.
5. There were 265 more reported confirmed 2019-nCoV cases on January 24 than the last WHO situation report published 1 day earlier on January 23. This included 259 additional confirmed cases in China.
Source: WHO Situation Report – 4. 24 January 2020. 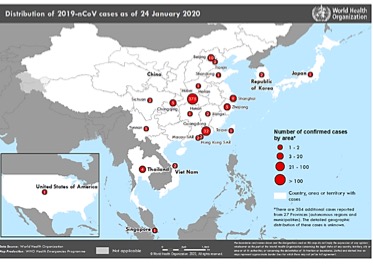